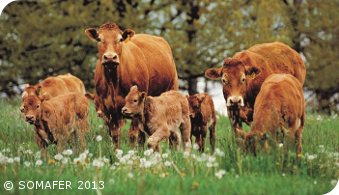 > The result of a regional partnership:

In 1913, the FERRAND family set up a slaughtering and wholesale meat business in Haute-Vienne.

In 1975, SOMAFER was created from the merger of the FERRAND family and a group of breeders, CELMAR.

Since its creation, SOMAFER has been involved in numerous projects, all of which have the common objective of identifying and marketing meat identified with brands and labels, to provide consumers with quality guarantees.

> A pragmatic and mastered evolution: